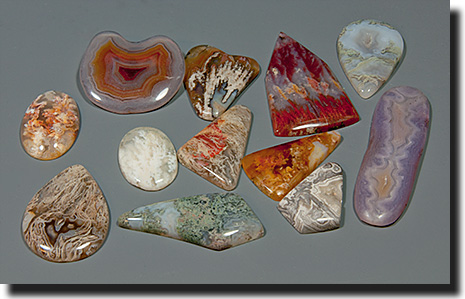 PHYSICAL PROPERTIES:
VARIETY: Quartz
Chemistry: SiO2
Composition: Silicon Dioxide
Class: tectosilicate
Crystal System: Trigonal
Fracture: conchoidal
Hardness: 7
Specific Gravity: 2.65
Refractive Index: 1.544-1.553
Pleochroism: weak to distinct
Luster: vitreous
Streak: white
Color: almost any color
Cleavage: none
Transparency: opaque to translucent, rarely transparent
Agate is one of the most varied and desired forms "chalcedony" which is one of the many varieties of quartz. Scientifically classified as a cryptocystalline or microcrystalline quartz, it has a hardness of 7. Quartz, in all its forms, is the single most abundant mineral on earth, making up almost 12% of the earth's crust. Quartz varieties are separated into two basic groups, macrocrystalline and microcrystalline. In macrocrystalline quartz the individual quartz crystals can be seen with the naked eye. In microcrystalline, sometimes called cryptocrystalline, the individual crystals are to small to be seen even under slight magnification.

Agates and chalcedony in other forms, like chrysoprase and carnelian, jaspers and flints, are some of the cryptocrystalline forms of quartz. Some examples of the macrocrystalline forms of quartz are amethyst, ametrine, citrine, rose quartz, rutilated and smoky quartz. Agates in many different varieties are distributed worldwide but localities of agate beds of major significance only number less than a hundred.

Humanity has admired agates for thousands of years. In ancient times the beauty and durability of agate prompted man to use it in both practical and ornamental forms. It was believed that agate had unique properties that protected the wearer from dangers and promoted strength and healing.

Agates in general come in many different forms and are formed in at least five different ways. The main conditions necessary for agate formation, are the presence of silica from denitrified volcanic ash, water from rainfall or ground sources, and manganese, iron and other mineral oxides that form the bands and inclusions.